For unto us a child is born, unto us a son is given: and the government shall be upon his shoulders: and his name shall be called Wonderful Counselor, The Mighty God, The everlasting Father, The Prince of Peace. - Isaiah 9:6 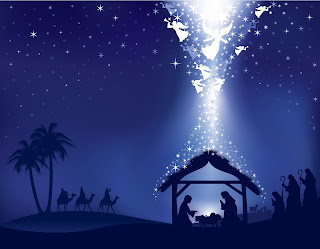 About 700 years before the baby in the manger, the prophet Isaiah wrote several passages predicting the events and person of the coming messiah.  The striking similarities in Isaiah's description and the Nativity story in the Gospels of Matthew and Luke lead to the obvious conclusion that both are referring to the same baby Jesus.


Therefore the Lord Himself will give you a sign; Behold, a virgin will be with child and bear a son, and she will call His name Immanuel (God with us). - Isaiah 7:14

Isaiah's description not only includes the birth of a baby boy, but also the life mission and immortal identity of this child.  This was no ordinary infant, who grew into an extraordinary man, with supernatural attributes.

Take the title "Wonderful Counselor".  The word "wonderful" here literally means "supernatural".  Jesus is not simply a wonderful counselor according to human terms, the best that money can buy, but instead He is a counselor with supernatural power.  He has the ability to repair what man cannot.  Broken marriages, clinical depression, rebellious hearts, political strife, and even international conflict.

The baby in the manger also is given the title of "Mighty God" and "Everlasting Father".  Obviously, Isaiah was speaking on behalf of the Lord here... or he was completely insane.  Who looks at a baby and calls him Mighty God?  Who predicts a birth of a child, and refers in advance to this kid as the Everlasting Father?  The coming messiah was an event that all the world anticipated, especially in the nation of Israel.  But, even men of royalty from foreign lands traveled hundreds of miles across the desert to see this little boy, further evidence of the extreme nature of his identity.  The world is a messy place, with much strife and conflict.  Who can resolve these deep issues?  Only Deity in flesh.

Isaiah's final title for Jesus is "Prince of Peace".  When sin entered the word in the Garden of Eden, peace between God and man disappeared, and without a peaceful relationship with God, mankind quickly developed strife with one another as well (see Cain and Abel).  This is why Isaiah's prediction that the Government will be upon His shoulders is so important.  Just look at the world around us.  Regardless of whether you are a Democrat or Republican, Muslim or Jew, or Capitalist or Communist, we have clearly proven that we cannot govern ourselves in unity and peace.  The promise of the Government being on the shoulders of Jesus is so refreshing, given the venomous relationships between nations, politicians, and everyday people in our world.

All this sounds nice, but what evidence do we have that Jesus actually brings this kind of counter-culture to our world?  An interesting story comes to us under the title of "The Christmas Truce of 1914". 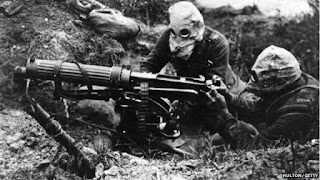 World War I was probably the most brutal war in the history of the world.  Modern technology had allowed nations to produce weapons of destruction that were so new on the scene that no one had had the chance to evaluate their effect, or the morality in using them.  Tanks, submarines, planes, artillery, mines, machine guns, and chemical weapons were used throughout the war with devastating results, because there was no defense and no moral boundary set.  Prior wars had been fought with men facing one another with single shot rifles.  All of a sudden, any given battle resulted in the loss of tens of thousands of lives.

In four years, over 16 million people died in the Great War.  While this number pales in comparison to the raw numbers of World War II (you could make an argument that it was really one long conflict), the brutality of the war, and the way people died, caused the entire world to stop in horror and consider future conflict.  The Treaty of Versailles and the Geneva Convention set rules of war regarding chemical weapons, treatment of prisoners of war, and other boundaries of international conflict, that were agreed upon by virtually every nation on earth.  In other words, "We know we will have future wars, but when we do, there needs to be rules set to protect us from going too far."  An amazing thought  when considering the win-at-all-costs mentality of war. In the midst of this great conflict, on the Western Front in Belgium and France, an amazing thing took place.  After months of shooting, bombing, poisoning, and killing, opposing troops were holed up in trenches on opposite sides of "No Man's Land".  It was Christmas Eve, 1914.  As night came, and darkness fell across the battlefield, there began the sound of singing.  German troops on one side, and Allied troops on the other.  As each listened to the Christmas Carols sounding from their enemy, hearts began to soften, and the realization of a common Savior took precedent. 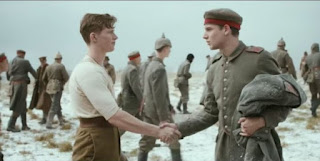 After hours of back and forth, both sides simultaneously joined in singing "O Come All Ye Faithful", each in his own language.  The unity of the song brought heads carefully above the edge of the trench, and exchanges of "Merry Christmas" in the opposite language to the other side.  Eventually over 100,000 men emerged from the trenches and met between their battle lines to sing hymns, exchange gifts, pose for pictures, and even play some soccer matches.  in this stretch of battlefield, on Christmas Day 1914, no shots were fired, and the Prince of Peace prevailed.  There was an agreement that Christ reigned supreme over political conflict, and that recognition of His incarnation is much more important than proving points and gaining power. 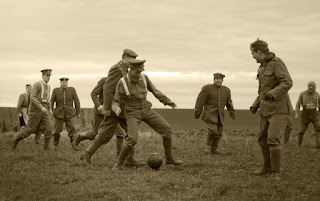 I bring this story up to suggest that our society's avoidance of anything Christian is the root of the problem in America, and around the world, today.  Jesus promised to be our Prince of Peace.  He is identified as our Wonderful Counselor.  And, after all, since He is Mighty God and Eternal Father, He surely has the power to be what He claims to be.  If warring nations can lay down mustard gas and machine guns in the name of Christ, why can't Americans tap into the Savior in our time of need?

Laying our Bibles aside, removing prayer from our kids routine, and doing what is right in our own eyes has led to disaster.  The answer to our conflict is not more education or reason or dialogue or acquiescence.  The solution is the recognition of our true spiritual enemies and of our own flesh as the sources of our sin, and pointing ourselves to the only true remedy - a Savior. 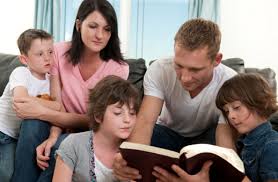 This baby in a manger is much more than a picturesque Christmas card.  He is our Eternal Father and our Prince of Peace.  He is our only hope.  Our future depends on our faithfulness to that truth.


Merry Christmas!
Posted by Tracy Robinson at 11:02 AM No comments:

Tracy Robinson
Greetings! I am Tracy Robinson, Headmaster at Hickory Christian Academy in Hickory, NC. I have the awesome privilege of assisting Christian parents in preparing their children to become God's leaders for tomorrow. I am thrilled to be married to my best friend, Gayle, and to have six precious gifts from the Lord in Kristen, Sydney (plus son in law Conlan), Amy, Sam, Julia, and Levi. Every day with a family of eight is an adventure, and when you add 500 other children to each day, it really gets interesting. God is so good to allow me the experience of this wonderful life. I hope you enjoy a little piece of my daily thoughts and routines through these postings.